As a retail space, the first Concepts store in Cambridge, Massachusetts was way ahead of its time. Opened in 1996, it combined premium
clothing and outerwear with sportswear and sneakers. This may sound like a familiar formula to footwear enthusiasts in 2016, but that is
only because retailers like Concepts pushed the envelope and provided a blueprint for other stores to follow.

Consortium seeks to elevate models from the adidas fleet, and in collaborating with Concepts, they present the EQT Support 93/16 in its
most luxurious form ever.They take the sneaker’s performance heritage, add a modern sole and give the shoe a makeover using premium
materials topped of by subtle ennoblements such as gold accents and silver/reflective highlights.

Initially released in 1993, the original EQT Support provided runners with stability and comfort. Over the subsequent two decades it has
evolved from a classic runner into a style staple. The significant shift with the 93/16 model is the inclusion of the boost sole, drafted in from
adidas’ current running footwear.boost provides unparalleled comfort and contemporary lightweight cushioning.Although you probably would
not want to trash these running, at least you know they would be seriously comfortable if you did.

Available in a black/white combination or sage with light pink stripes, both models comein soft suede with either a perforated toe-box or
reflective mesh toe-box detailing.

Concepts have kept things understated, and focused on quality; taking a no-nonsense approach to styling. Together, adidas Consortium
and Concepts continue to raise the standard for lifestyle footwear crossovers. 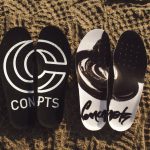 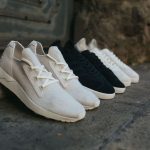