Sneakerboy is relatively new to the sneaker game but the Australian store has quickly built a solid reputation in the upscale footwear market. It operates stores in Sydney, Queensland, Melbourne, and Chadstone. In Atlanta, Wish is the city’s leading sneaker spot and one of the finest footwear outposts in the American South. Over the years the retailer has made a name for itself via high-profile product collaborations and strong online editorials.

The two stores had never interacted before Consortium linked them up for the Sneaker Exchange. Their challenge was, once again, to find common ground to deliver a stunning design concept for this series. The partners present a PureBOOST and an updated Climacool 1 in a novel Primeknit execution. Both styles are striking in the use of the knit technology with a completely new take on branding and detailing.

Sneakerboy’s stores are all situated on the Australian Coast so the retailer looked to the sea for inspiration and began exploring aesthetic references to the box jellyfish, the world’s deadliest jellyfish. Its translucency and luminescence were the starting point for the collaborative design process. Even though native to the Australian waters, Wish – by chance – also knew of this particular jellyfish: the Georgia Aquarium is one of only four institutions in the world which houses the specimen. A great coincidence and exceptional link between these two partners.

The PureBOOST glows in the dark, yet its most distinct feature is the use of clear, loose gauge knit detailing on the shoes 3-Stripes branding. A functional feature never before used on other Primeknit models. The distinctive sock-like construction paired with a wide lacing system helps to to make this one of the year’s guaranteed neck breakers.

The other model that gets a jellyfish makeover is the Climacool. This iconic, early 21st century runner is currently enjoying a real renaissance. This time it is made translucent and, as its counterpart, luminescent. Similar to the PureBOOST, a new Primeknit fiber processing is applied that results in a geometric- patterned upper. As well as an outstanding product, it is a great example of adidas returning to an archive model and giving a type of contemporary rework impossible at the time of the Climacool’s initial conception.

As well as pushing one another, Sneakerboy and Wish challenged adidas to raise the game and reinvent. Two partners with a clear vision were given access to adidas’ wide spectrum of materials and production technologies and they deliver a product that is both, novel and exceptional in design and functionality. 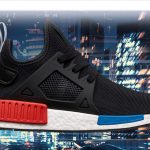