The second instalment of the 2017 Sneaker Exchange is a transcontinental collaboration between two major Consortium partners.
Sweden’s Sneakersnstuff began life in Stockholm and has gradually opened stores across northern Europe. Similarly, Social Status started with a single store in North Carolina before expanding around the eastern United States.

Geographical expansion may have served as an ice-breaker, but adidas Consortium challenged the two parties to find further common ground to work together on a sneaker pack. After sharing and developing ideas, they present two models which reflect the changing role of sneakers in both a practical and a wider social sense.

Initially intended as performance footwear for athletes, sneakers have grown in cultural significance; becoming style and design icons in their own right. Conversation developed between the two retailers on how classic sporting equipment can become iconographic. How it can, over time, gradually be elevated and reimagined, get remade in expensive materials, in silver or gold, and encrusted with jewels or diamonds. That opulence serves as the inspiration behind the colourways here. The result is athletic footwear reimagined in monochrome luxury. 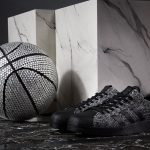