West Coast sneaker powerhouse UNDEFEATED collaborates with adidas for the next chapter of the Consortium Tour in Los Angeles.

UNDEFEATED may have opened stores across the United States and as far afield as Japan, but here the retailer pays homage to its local heritage. It reworks the Busenitz – a skate classic – in a colour reminiscent of the Californian desert.

This Busenitz celebrates the golden era when the surfers came ashore, attached wheels to their boards, hit the walkways and began a skating revolution. Skateboarding may have come a long way over the past half century but skaters still need their footwear to meet exacting demands.

It must be lightweight and perform like a sports shoe with a sole tough enough to withstand a thrashing off the concrete. The Busenitz began life as a soccer shoe but was adopted by the skate community due to its hard wearing durability.

UNDEFEATED ventures beyond the shoreline and into the vast desert, which serves as the inspiration behind this execution. While sand is the dominating colour on its upper, subtle desert camo details are found on the medial 3-Stripes and the Busenitz’s signature extended tongue.As well as suede, this Busenitz is made using hard wearing CORDURA nylon, a military material to match the military aesthetic.

With utilitarian footwear and apparel gradually creeping further and further into day-to-day styling, this collaboration is a reminder that UNDEFEATED – champions of ‘functional’ from the beginning – stay committed to all the right principles.

The Busenitz x UNDFTD will be available next Saturday, September 17th at limitEDitions WMNS. 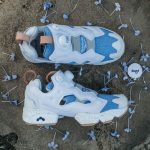