After twelve months of globetrotting, the Consortium Tour makes its final stop for some December warmth in Downtown Miami. This instalment comes courtesy of Shoe Gallery, the family business which has been selling sneakers to Floridians for five decades. Here it collaborates with adidas Consortium to produce a colourful Climacool 1 “Flight 305”, a model that has enjoyed a strong renaissance during 2016.
The story begins on Ocean Drive, the long road which runs along the South Beach waterfront, lined with the city’s now iconic art deco buildings. Painted in a variety of pastel shades, by day, these buildings are architecturally striking, but by nightfall – under the illumination of multicoloured neon signs – colours begin to warp and blend into one another..

These buildings serve as the inspiration behind Shoe Gallery’s Climacool 1 colourway. Upon immediate observation they might appear black but in light, and with movement, the shoes’ stunning effect is revealed. Beneath the dark outer mesh lies a XENO film membrane that mimics the multifaceted, multi-coloured shimmer of snakeskin.

But there is more going on than simple, colour-based decisions. Shoe Gallery has a design concept which works on two levels. The retailer has teamed up with Drone Nerds and Miami-based Grammy Nominee producer Cool on this model. The execution is a playful nod towards unmanned flying vehicles with stealthy black bodies accented by the shimmer of their propellers. Shoe Gallery envisions such drones as the future of footwear delivery.

When first released in 2002, the Climacool 1 received popular acclaim for its strong aesthetic and lightweight, cutting-edge breathability. Befittingly, in 2016, the adidas Consortium Tour concludes with a model that has enjoyed a big comeback year. 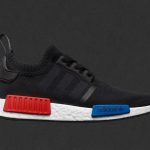