The Munich-based contemporary fashion brand brings its commitment to premium materials and craftsmanship to a poolside-inspired pair of uncaged UltraBOOST and accompanying slogan towel.

The original UltraBOOST that launched in the early months of 2015 quickly established itself as the most impressive example of the high-performance functionality and meticulous craftsmanship that has come to define the adidas running shoe roster. The UltraBOOST Collective was formed later that year as an opportunity for some of the most revered brands and designers from around the world to create their own distinctive take on the shoe.

The adidas Consortium x A Kind Of Guise will launch at limitEDitions WMNS on Saturday 25th of August.

For their UltraBOOST collaboration, Munich-based brand A Kind of Guise teamed up with the adidas Consortium team and created the fictitious ‘AKOG Athletic Club’. Imagining the perfect holiday experience as a blend of gentle laps around the track, a spot of sightseeing and long lounging by the pool, the ‘club’ offers its guests the finest companions in the form of a new UltraBOOST style and accompanying towel. Their UltraBOOST boasts a chalk white Primeknit upper with a raised, rippling wave effect and an uncaged construction with wide, wraparound tonal lacing to emphasise the subtle yet distinctive textures. The BOOST cushioning is cloaked in a multicoloured, marble-effect outsole that lends just enough color to catch the eye of fellow holiday-makers. Offsetting the refined stylings of the AKOG UltraBOOST is a bold, premium velour towel, playfully adorned with the bright yellow slogan: ‘No Worries We’ve Done This Before’. A mantra worthy of those who are equally at home pounding the poolside pavement or relaxing under the sun. 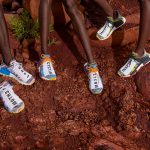