adidas Consortium and US retailer BAIT present two futuristic EQT Support models. Inspired by the relationship between humans and technology, and exploring the convergence of man and machine, the result is a clean, clinical pack with an assortment of smart details.

Since the opening of its first store in 2011, BAIT has made a big impact and grown quickly. There are currently eight BAIT stores stretching up the West Coast from Southern California to Seattle, Washington, Colorado, and next up Hawai.

BAIT’s decision to link the design of its pack to state-of-the-art research and development feels highly apt. While in 2017, EQT – original as well as updated – continues to enjoy a renaissance, the models in this range were originally created for performance. They were created during an era when adidas’ R&D obsessed over striking patterns and how best to equip every style of runner with suitable footwear. R&D runs to the very epicenter of the EQT’s DNA – whether it’d be the heritage styles or the next gen models.

The BAIT R&D pack pushes the EQT project further forward than ever before. It combines BAIT’s enthusiasm for futurism with recent technological advancement made by adidas. Neither Primeknit uppers nor BOOSTTM soles were available in the early nineties, when adidas first embarked on the EQT range, but subsequent developments allow to continue, taking classic models to new places.

There are two standout features on both of these EQT Supports by BAIT. One is the highly distinct mesh optimized cage construction, which enhances the shoes’ stability while keeping the upper flexible and the lacing system quick to use. The other is not immediately apparent. It is the skeletal pattern, which reflects in one model and glows in the dark on the other. Low-key flare that is subtle in the day, but makes them total show- stoppers by night. 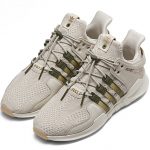 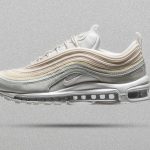