For their first collaboration since 2016, adidas Consortium and Japanese sneaker legends Mita join forces on two new footwear styles. Each shoe is inspired by the eye-catching interiors of the Mita store and its Tokyo surroundings.

One of the most memorable collaborations from the 2016 adidas Consortium ‘World Tour’ saw the Tokyo-based retailers Mita breathing new life into a rugged 90s style, the SeeULater hiking shoe. Their latest team-up sees Mita applying their well-honed eye to one of the most enduringly iconic sneakers from the adidas stable, alongside anew take on a future-classic. This time, rather than looking to the great outdoors for inspiration, Mita and adidas Consortium have focused on the details and surrounding streets that have made the Mita store a must-visit destination for sneakerheads.

The NMD TS1 PKI is an evolved take on one of adidas’ most contemporary styles. Featuring primeknit uppers, BOOST soles and a pull tab lacing system/heel tab combination, the sneakers are perfectly suited to the hustle and bustle of contemporary Tokyo. The uppers also feature a tonal mesh pattern that calls to mind the wire cages famously used to display each footwear style sold within Mita.

The Mita iteration of the Stan Smith arrives in a black and white colourway, rendered in premium leather uppers with a contrast sole. A host of blacked-out tonal additions, including heel tabs and metal side-zips, are offset by white text that runs downs the entire length of the tongue and across the heel. For the uninitiated, the text might look like an arbitrary sequence of numbers and letters – in actuality, they are the geographic coordinates for both the Mita store in Tokyo and the adidas headquarters in Germany.

Together, they exemplify the Consortium mantra at the heart of this and many other collaborations:
“The Respect is Mutual.” 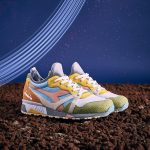