adidas Consortium and Swiss footwear powerhouse Titolo collaborate on a fresh, icy NMD. With stores in Zurich, Bern and Basel, Titolo has looked to the region’s dramatic outdoors to create a sneaker inspired by alpine snow zones and hidden glacial phenomena.

Upon casual inspection, snowscape is a plain blanket, a vast, one-tone expanse of white. But pan out above the mountainside and patterns begin to emerge. The outermost layer of powder shifts, forming tessellations and sweeping, ever-changing corrugations on the surface. The Titolo NMD XR1 Trail reflects this landscape via a loose gauge pattern in the sneaker’s Primeknit upper and perforated leather details, while the asymmetric overlay resembles a snow coated ridge in the sunlight.

Mountainous patterns are further echoed in the textured structure of the BOOST midsole. The outsole, the only part of the shoe that is not white, summons the image of an exposed glacier. Millions of years in age, wondrous, translucent and impossible to explore beyond the surface, it is a smart and evocative source of inspiration for the rarely-seen underside of a sneaker.

Zooming in really closely on a snowscape reveals patterns, too. Rather than a mass of white, it is the conglomeration of billions of individual snowflakes. Titolo has captured this notion through immaculate attention to detail. To do so, the retailer sought influence from women’s couture, the manufacturing sector where vast amount of work and detail underpin even the smallest, most subtle elements of the final product. The result is both unique and immediately striking.

Titolo succeeds in distilling the most epic elements of nature into a stunning sneaker. 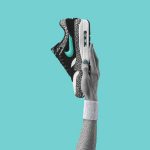 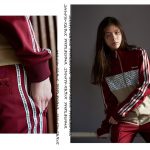