This year has seen numerous adidas Consortium releases paying tribute to the ZX running series and its unique Torsion System technology, which debuted exactly thirty years ago. It’s a technology that has since become a mainstay in the adidas stable, appearing across numerous performance and lifestyle shoes over the subsequent decades. By using a TPU arch to bridge the heel and forefoot, Torsion allows the front and rear of the foot to operate and adapt to surfaces independently.

The latest Consortium partner to bring its distinctive sensibility to this celebratory series of releases is London’s Footpatrol: a go-to destination for the most coveted footwear in the capital city since 2002.  The store quickly became a hub of knowledge, creativity and community within the sneaker world – something reflected in their offering of new and classic styles, limited editions, Japanese exclusives and rare deadstock.  For their latest collaboration with adidas, the Footpatrol team brought a distinctly London vibe to the ZX Torsion: a shoe that combines the Torsion System with the latest BOOST cushioning for an undoubtedly contemporary look and feel, while still retaining the qualities that made the ZX range so special in the first place.

With the shoe’s release coinciding with the Notting Hill Carnival, Footpatrol felt like it was an opportune moment to channel some of that carnival spirit into the shoe through the use of ‘boxfresh’ shades of white and popping bursts of neon yellow that appear on the shoe itself. With over two million revellers taking to the streets of West London every August Bank Holiday, Notting Hill Carnival is a true London institution, and one that holds a special place in the hearts of the Footpatrol team: a time and place where the very best styles, moves and music – three things that have long influenced sneaker culture – come together under one joyous banner.

For the release of the Footpatrol ZX Torsion then, adidas and Footpatrol created a three-part documentary that takes an in-depth look at one of Notting Hill Carnival’s most enduring and well-loved acts, the Ebony Steel Band. Founded in 1969, the Caribbean and British group have been bringing the vibrant sounds of steelpan drumming to Europe and beyond for generations. It is this generational legacy that the videos focus on, beginning with a look at the personalities, histories and intrinsic connections to the carnival that have brought the band to where they are today. The second part of the series follows the band as they prepare in the buildup to carnival while the finale inevitably features the carnival performance itself, capturing everything that makes carnival so special in the process – from the floats to the food, from the sound systems to the street-style. 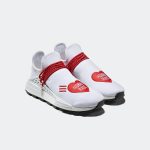 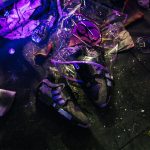