adidasunveils the adidas Ultraboost 19, the spiritual successor to the original Ultraboost that were all quite familar with. An entirely re-imagined and redesigned version of the iconic adidas performance running shoe. A crack team of adidas designers and product developers worked with well over a thousand runners from across the globe to create the new Ultraboost. The overwhelming feedback from runners was that running is changing, it’s becoming younger and more democratic. With the emergence of city running clubs and fun runs, running is now a sociable sport rather than just something people do on their own. Runners made it clear during the development they wanted a simpler product with fewer pieces but equally high performance.

To reflect that, the original adidas Ultraboost was torn apart and rebuilt, originally utilizing 17 pieces in its construction the adidas team have honed in to focus on four key components – Optimized BOOST, Torsion Spring, Primeknit 360 and the 3D Heel Frame.

Check out the clip below to get an in-depth look at adidas’s journey to create the Ultraboost 19.
The adidas Ultraboost 19 ‘Dark Pixel’ launching Thursday 3rd of January at limitEDitiosn WMNS .

Sam Handy, Vice President Design, adidas Running, said: “In creating the adidas Ultraboost 19, we tore up the rule book. We challenged the status quo of what a running shoe should be and how it should be created.”

“We enlisted runners from all over our network to be a part of this process, with one goal in mind – to create the most responsive, performance-driven version of the adidas Ultraboost possible.”

“On this journey, we literally tore apart the old model and discovered new testing, manufacturing and coloring methods to really challenge ourselves to reach our ambition.”

The Optimized BOOST in the Ultraboost 19features 20{1be1ed28972943da73d0e0db83bead14ceba6511cbee988c4d477f2dab0c1bed} more BOOST in the midsole compared to the first-generation adidas Ultraboost, this updated technology brings even more energy return. Whilst the Torsion Spring (a lightweight construction for enhanced support on landing and a snappy transition to propel runners forward) sees an overhaul too. It wouldn’t be an Ultraboost with that Primeknit upper! For the UB19 adidas deploy a 360 knit –that feels like a second skin, combining pure comfort with lightweight performance. Finally, adidas turn their attention to the heel cage which boats an Updated 3D Heel Frame–a stripped-back design cradles the heel, bringing the perfect mix of adaptability and support.

One of the first to emerge from the latest batch the adidas Ultraboost 19 ‘Dark Pixel’ boasts a multi colour knit detail set against a core black base. 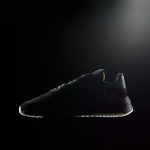