adidas team up with environmental organisation Parley a cultural group who raise awareness for the beauty and fragility of our oceans.

To coincide with the return of the Run for the Oceans initiative, adidas and Parley for the Oceans are releasing a limited edition UltraBOOST Clima inspired by the fragility of the oceans. Continuing their battle against the biggest threats to our oceans and planet, the duo once again combines adidas’ finest performance technology with progressive eco-innovation. The Parley Ocean Plastic™ Primeknit upper sits atop an ever-reliable BOOST midsole for a silhouette that prevents 11 ocean-bound plastic bottles from entering the oceans per pair.

For this project we see adidas’s ultraBOOST Clima being reworked in Parley’s familiar oceanic aesthetic. Arriving with a Primeknit upper in a predominantly white knit with navy details and light blue “wave” effect stitching on the heel. Before signing off with a dual branded tab on the tongue. 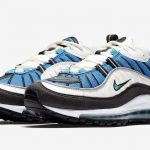