What unites all the portrayals of death across cultures and time is the same thing that unites all people past, present, and future as a fact of life. Death is universal and inexplorable. Everyone is going to die, and everyone means everyone. The king and the pawn will be swept off the board in the end, without distinction between the two.

The GEL-MAI model is a thoroughly late 1990s tech design, a notable departure from familiar ASICS classics like the GEL-LYTE® III or V models. The upper is one piece, with a totally external, asymmetrical lacing structure, with the standard ASICS Stripe design relocated to a two dimensional logo on the midsole, towards the heel of the shoe.

Choosing a techy, performance model deliberately suggests the dynamism of human movement, and the skeletal structure as the foundation of this physical vitality. Even the colorway recalls the athletic roots of the GEL-MAI more than it does a creepy cemetery.

By presenting the skeletal imagery in anatomical form, the skeleton is presented as two sides of one coin, as an agent of motion and mortality; It is a visual representation of the juxtaposition between one of the most vibrant cities in the world, and the legions of human bones beneath its streets.

The more universal message is that no matter who you are, or what journeys you take in life, everyone ends up as a skeleton in the end. 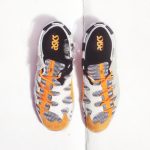 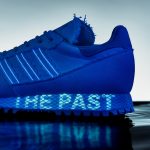