The traditional Japanese story of Tanabata tells of a forbidden love between a princess, named Orihime, and a cow herder called Hikoboshi. Eventually the two were separated and only allowed to see each other on the seventh day of the seventh month. Nowadays on July 7 people around Japan celebrate Tanabata, also known as the Festival of Stars.

To celebrate this year, Asics have put together a release containing a Gel-Kayano Trainer and a Gel-Respector. The Gel-Kayano features a mustard coloured upper, with a woven texture added its suede panels, to represent the expert weaving of Orihime. The Gel-Respector has a moss green upper adorned with hairy suede as a nod towards the Hikoboshi and
his cows. Both feature custom insoles, Tanabata is written in Japanese on that of the Gel-Kayano, while a stylised image is featured on the Gel-Respector.

The Asics Gel “Tanabata” Pack will be available next Thursday, July 7th at LimitEDitions WMNS . 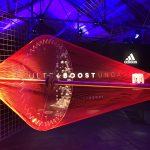