To celebrate its 25th anniversary year, Hanon have partnered with Reebok to re-imagine the iconic Ventilator running shoe. The inspiration for this project continues a familiar thread as Hanon look to his roots in Scotland, this time drawing from the legendary story of Robert The Bruce and the Spider.

Recognised worldwide, the legend tells of Robert The Bruce – King of Scots and his encounter with a spider whilst on the run during the Wars of Independence. Seeking refuge in a cave, The Bruce happened upon a spider struggling to spin a web. Inspired by the spider’s laboured attempts and  determination to succeed in the face of adversity, Robert The Bruce went on to triumph with the Scots in an epic battle at Bannockburn in 1314.
This version of the Ventilator is a full execution of rich pig suede. The mossy green and purple colour way depicts the hills and stone of Scotland whilst the black lining represents the cave in which Robert The Bruce sought refuge. A Spider’s web sublimation print appears on the tongue backer and footbed whilst dual branding is called out via a woven tongue label. Additional detail appears on opposing heels- embossed hanon flame on the right and spider on the left. Each pair will be available with three sets of  laces – two tonal and one white. 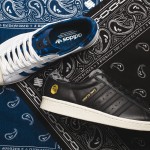 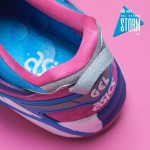