Asics GT-II was released in 1986. This year, 2016 is the 30th anniversary of the GT-II which is the first product that Gel was applied. Asics joins forces with the classic Mita Sneakers store to present this new edition.

While the motif of this design is a squirrel that is running around legerity in the park where city runners go for jogging tracks, Asics and the japanese store also applied their epoch design. Asics came up to our imaginate story that the above combination would lead us making shoes to move freely, and it was the source of the shoes.

As the image of a squirrel, there are different lengths of suede, and various tones of brown at uppers and outsoles of shoes create a gradation design. The each side of shoes have different design: the Asics iconic tricolor and the Squirrel’s coat. This design came from a story that the squirrel is wearing Asics Tiger. Moreover, the text “EYGHTYSYXTOSYXTEEN” is engraved on its midsole to commemorate our 30 years history. 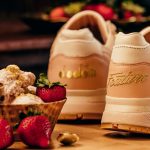 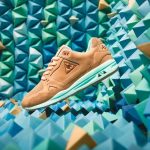