Let the lightest Air ever propel you forward. The Air Max evolution reaches its pinnacle in the Nike Air VaporMax, a silhouette in which future-facing technology meets decades of innovation and iconic design.

For 2017, Nike has paired the Air unit with a Flyknit upper that integrates precise support and further reduces the shoe’s weight. By placing the ultra lightweight upper directly on the VaporMax Air unit, a pillowy sensation and greater energy response are produced.

The promise of actually running on air without anything to stand in your way.

Reigniting the Air revolution, the Vapormax takes visible cushioning to new levels with the wearer experiencing greater flexibility than ever before.

The closest thing to running on air, the heavily cushioned silhouette arrives with Nike’s breathable Flyknit uppers and Flywire lacing; delivering stability in the lightest model yet. What began as an experiment has evolved into a release; re-imagined and retooled for the track and streets almost three decades later. 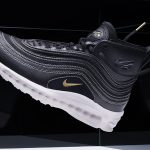 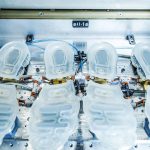