In 1996, Nike Running quietly made its first foray into footwear promoting natural motion with the introduction of a sneaker/sandal hybrid called the Nike Air Rift. Though not heavily advertised or marketed, the shoe’s unique split-toe design and stretch fit attracted an audience who saw beauty in its progressive and slightly odd package.

The design of the Air Rift was inspired by the efficient barefoot style of Kenyan distance runners and their international competition dominance. To honor the fleet-footed muses, the shoe debuted in the colours of the country’s flag and drew its name from Kenya’s Rift Valley province. Kenya’s topography lent more than its name to the Air Rift’s design. The nation’s signature characteristic, the stunning Great Rift Valley fault line, provided a second source of inspiration for the shoe’s defining characteristic: a decoupled toe that created articulation between the wearers first and second toes.
Re-launched for summer 2015, the Air Rift’s idiosyncratic glory remains intact. A textile-engineered mesh upper that wicks moisture and allows for optimal ventilation augments the shoe’s distinctive style. The defining split-toe, in harmony with a flexible natural motion outsole, provides enhanced traction. Two Velcro closures on the heel and midfoot secure the foot with a customisable fit. 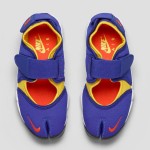 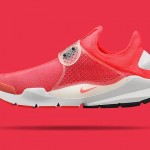