Platinum, a brilliant and practically unoxidizable metallic element, is the modern present given to commemorate a 20th wedding anniversary. And although the Air Max 95 is celebrating two decades of industry-leading innovation, rather than matrimony, Nike Sportswear has employed the 78th element’s symbolic hue to embellish an exclusive version of the paradigmatic sneaker.The women´s version takes on the look of raw platinum jewellry with variuos textures. 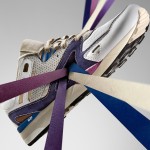 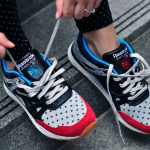