The Nike Air Max 98 was originally released in 1998. For 2018, Nike has been celebrating the 20th Anniversary of the running shoe with original and new set of colorways.

Adding to the models lineup, Nike will be releasing another Blue iteration of the classic shoe. This release features a White upper highlighted with two different tones of Blue contrasted with a Black mudguard. A White midsole, Black rubber outsole and 3M Reflective trimming completes the design.

Look for the Nike Air Max 98 “Blue Nebula” to release on May 24th in women’s sizing at limitEDitions WMNS. 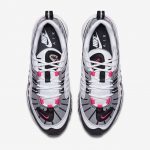