This Nike Zoom Mercurial Flyknit comes dressed in University and Black which gives them the ‘Bred’ nickname. The Flyknit starts off in Red while it transcends to Black towards the heel. In addition we have Black across the Nike Swoosh and again used across the midsole.

The Nike Air Footscape Magista Flyknit has been one of Nike Sportswear’s most successful models for its premium Flyknit build, comfortable ride, and aggressive aesthetic even off the soccer pitch. It’s great to see that NSW is still tinkering with the color blocking of the model, as today we get a look at as close to a “Bred” pair as we’ve seen yet thanks to a premium Gym Red woven upper paired with Black suede panels on the heel to match the Footscape-inspired outsole unit.

The Nike Footscape Woven Flyknit even manages to camouflage the Swoosh side panel branding through a matching Gym Red shade for an interesting new take. Luxurious Metallic Gold accents arrive on the heel tab with worldly ‘Nike Football’ branding printed in multiple languages including Chinese to match the sublimated Swoosh stitching on the heel. 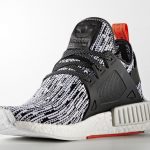 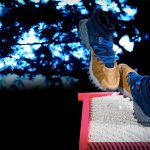